Study on Social Behaviour of the Feral Dromedary in Central Australia 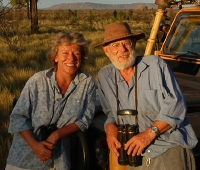 Study on Social Behaviour of the Feral Dromedary in Central Australia

Prior to this study, the social behaviour of the dromedary was completely unknown. In Australia, dromedaries have turned feral and only there do they live in large populations today. The study at hand on ecology, social organization & behaviour of the feral dromedary describes the detailed results of a long-term field study on individually known camels.

Of particular interest to cameleers and camel breeders in Central Europe could be the following aspects:

Camels are social animals, they live in groups and they should never be kept alone. Cows live together in cow groups, which are herded by a bull in rut during the mating season in winter. Adult bulls in rut compete aggressively for the possession of a cow group. Competitive behaviour is described and can have lethal consequences. Surplus bulls live in bacchelor groups, elder bulls also may live solitary. All social units are non-territorial.

During the mating season an adult bull herds a cow group. He chases away all attached subadult bulls, who then join bacchelor groups. The young cows remain in the group of their mothers. The herding bull defends his cows aggressively against competitors, demanding his exclusive mating rights. After a period of about 3 months however, towards the end of his rut, he leaves his group, often voluntarily, or when he gets chased out by another adult bull. Never the same bull herded the same cow group during the following mating season. Therefore the herding bull is not the biological father of the expected calves!

The gestation period of feral dromedaries is about 1 year. Before parturition, cows segregate from their group and give birth in seclusion. Mother and calf live alone for up to three weeks and subsequently join other mothers with young calves, they form kindergartens. These core groups are stable for a period of up to 2 years, until the young are weaned.

Highly significant in regard to camel breeding is the discovery of their socio-biological infanticide. Bulls in rut show a distinct aggression toward newborn calves, above all they abduct the mother, the still immobile calf cannot follow and dies. The loss of the calf leads to a fertile post-partum estrus of the mother which increases the individual chance for reproduction of the accountabe bull.
Nach oben
Antworten
1 Beitrag • Seite 1 von 1